FROM PRE-HISTORY TO THE ROMANS

The village of Bonnybridge has grown up, as is to be expected, on the land surrounding the Water of Bonny. This is a small river which rises near the village of Banton and flows eastwards towards the Firth of Forth. Before reaching the Forth the Bonny Water joins the main river in the area - the river Carron.

The land surrounding Bonnybridge consists of a broad, originally fairly marshy, lowlands surrounded by gentle hills rising to the north and the south. The wide, boggy valley would have been covered in a fairly thick forest and so not many people would have lived here in early history. However a very few did make some sort of living here as is shown by the finding of some New Stone Age pottery (about 2500 years BC). 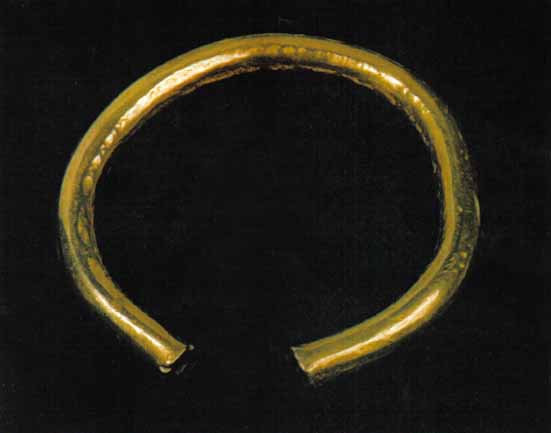 Further evidence of early settlement was a Bronze Age solid gold bracelet from about 1800BC. It was a massive object and is now in the National Museum in Edinburgh. (I bet the owner was seriously upset at losing something as valuable as that!) Click on the picture to see it larger. There is more information about the marvellous find HERE.
Even later, during the Iron Age (about 200BC), several settlements have been identified including one large, round structure (called a 'dun') situated near West Bonnyfield Farmhouse in Bonnybridge.
However, this was a quiet, empty part of Scotland with very few people living here - THEN CAME THE ROMANS!
Main Picture - Rough Castle Roman Fort, Bonnybridge 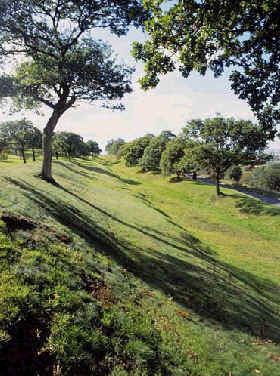 THE ROMANS!
This famous race of people moved in and out of the area for a number of years from about 83AD, moving backwards and forwards as their own wars were won or lost.
Eventually they came back soon after 138AD under the rule of emperor Antoninus Pius. At his command three Roman Legions (companies of soldiers) built the famous Antonine Wall - 37 miles across the middle of Scotland from east to west. It had a deep ditch to the north (where their enemies lived), a steep face up to the top of the wall (which was made of earth on a stone base), 28 forts (about 2 miles apart) and a good, fast road behind it for moving troops quickly.
In and around Bonnybridge there are three of these forts - Castlecary, Seabegs and, the most famous of all, Rough Castle.
The outline of the fort at Rough Castle is very clear in the photo to the left and you can still see the line of the wall and the ditch very clearly

One of the clearest views is at Seabegs,


The wall was completed about 142AD, but the Romans really only stayed for about 20 years before moving back to Hadrian's Wall in the north of England. (Perhaps the local tribes were too fierce - or maybe they didn't like the weather!) For a long time after the Romans left local people referred to the wall and ditch as 'Graham's Dyke'.
You can find out much more about the Romans in Bonnybridge HERE.