PROJECTS, VIDEOS and RESOURCES.
(Main photo - the stone monument recording the location of St Helen's Burial Yard, Bonnybridge's original cemetery, erected by Councillor Billy Buchanan,and now the centre of
BONNYBRIDGE AND DISTRICT HERITAGE PARK.)
HOME
The GREENHILL HISTORICAL SOCIETY consists of a small group of activists who wish to preserve our district's heritage and wish to educate our young people in the fantastic historical, industrial and social story of our past. We have been active in many projects as outlined below the first two videos.
Home
Bonnybridge is an ancient settlement with relics found that date back over 3000 years. However it was an important route centre even in those times, allowing passage across a ford over the Bonny Water which runs through it. Later this importance as a focus of routes became a vital part of the village's growth as the northern limit of the Roman Empire - the Antonine Wall - was built nearby. This was followed by the first of the bridges over the Bonny Water serving the main road network; the Forth and Clyde Canal; numerous railway lines; and the M80  motorway - all directed through or near Bonnybridge by the shape of the landscape.

This role as a route centre was crucial in the growth and development of Bonnybridge.

To commemorate the 100th anniversary of the start of WW1, the Greenhill Historical Society, in collaboration  with Cllr Billy Buchanan, planted a tree and installed a plaque in memory of those who died in that terrible conflict. Later still our memorial was incorporated into a larger event commemorating 100th anniversary of the end of WW1. Our tree and new plaque lie on the left of this photograph beyond the memorial benches.

Project 3 - The Smith and Wellstood Mural

Click on the link BELOW to find out about the amazing public response to the appeal to reinstate the destroyed
SMITH & WELLSTOOD MURAL.

BONNYBRIDGE and DISTRICT HERITAGE PARK
Our biggest project to date has been the completion of 'Bonnybridge and District Heritage Wall' along the Bridge St support wall next to the library. There are 16 large panels illustrating as much as we can cram in about our prehistory, the Romans, medieval history, early industry such as foundries, brick-works, clay mines, the war years etc. There is information about local farming, the tobacco factory, distilleries, chemical works etc right up to the present day! We even acknowledge the UFO stories which have made Bonnybridge (in)famous across the world.

We just needed the funding - £9,803.16 from Falkirk Environmental Trust and £8,100 from the Lottery Heritage Fund was enough to finish the project but a change in permissions mean we had to re-apply for Planning Permission. We soldiered on..... 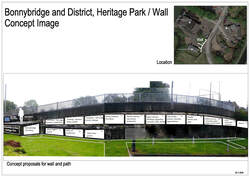 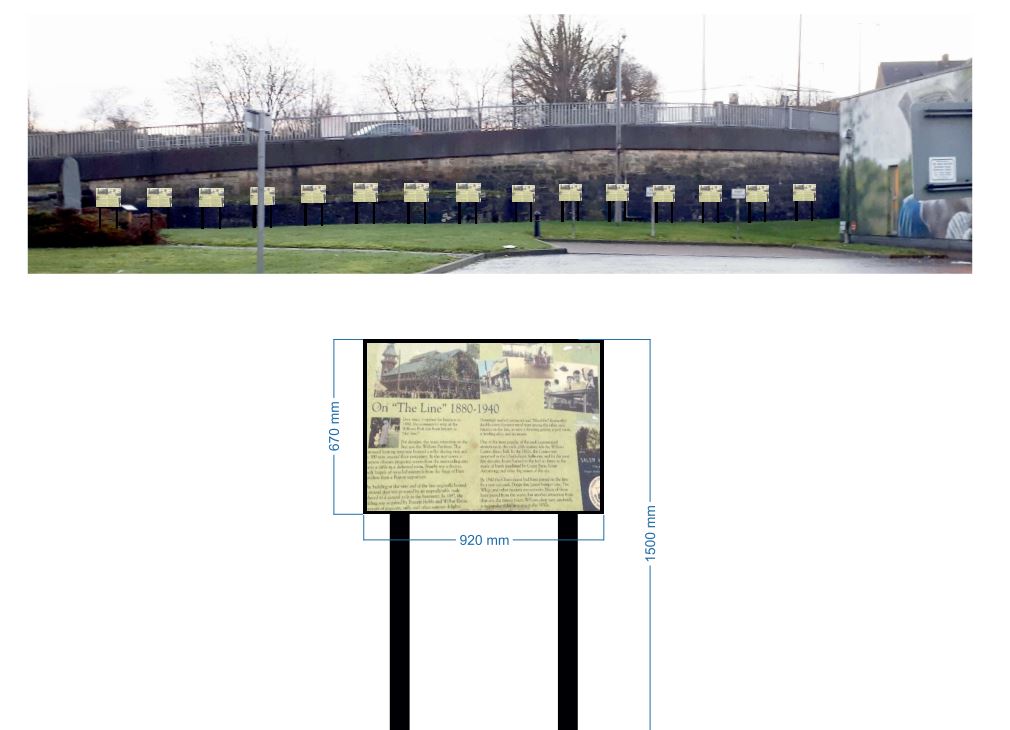 ...revised concept after new local council official's 'advice'! We even had to apply again for planning permission!
...and below a slideshow of the finished panels - but come and see them for yourself...Bridge St, Bonnybridge between the local library and the Community Education Centre.

THE 'UNREMEMBERED'
Below - a slideshow remembering the "Unremembered" members of the Labour Corps - conscripts from across the British Commonwealth and others who supported the troops in many ways and who died in their thousands but are largely forgotten despite the essential work they did.
Author - Phil Swierczek

HENRY HARRIS owned a traveling entertainment troupe who decided to settle with his family in Bonnybridge. He started showing movies in his 'big tent' but later built a wooden theater and later still a brick building solely for movies - one the earliest in Scotland to do so! A philanthropist, he offered free use of his premises for local charities and during the war years gave free entry to military personnel billeted in the village. We plan to erect a memorial plaque in his honour (shown below) when we get permission to do so from Scotmid.

At one point when designing the Panels for the Heritage Park we envisioned putting a statue on a low buttress on the Bridge St wall. This never materialised. We had mentioned this to the team developing the 'Rediscovering the Antonine Wall' project and they offered to support our statue concept. However our thoughts turned away from a statue and focused on the idea of an informative cast bronze piece of public art. This takes the shape of a flat-topped pyramid with a model of Rough Castle Fort on top. Two sides of the pyramid refer to Roman metalworking and Bonnybridge foundries, the other two sides refer to Roman brick making and Bonnybridge brick works. The bronze artwork, by Scottish sculptor Alan Potter, sits on top of a plinth built of narrow Roman-style bricks. 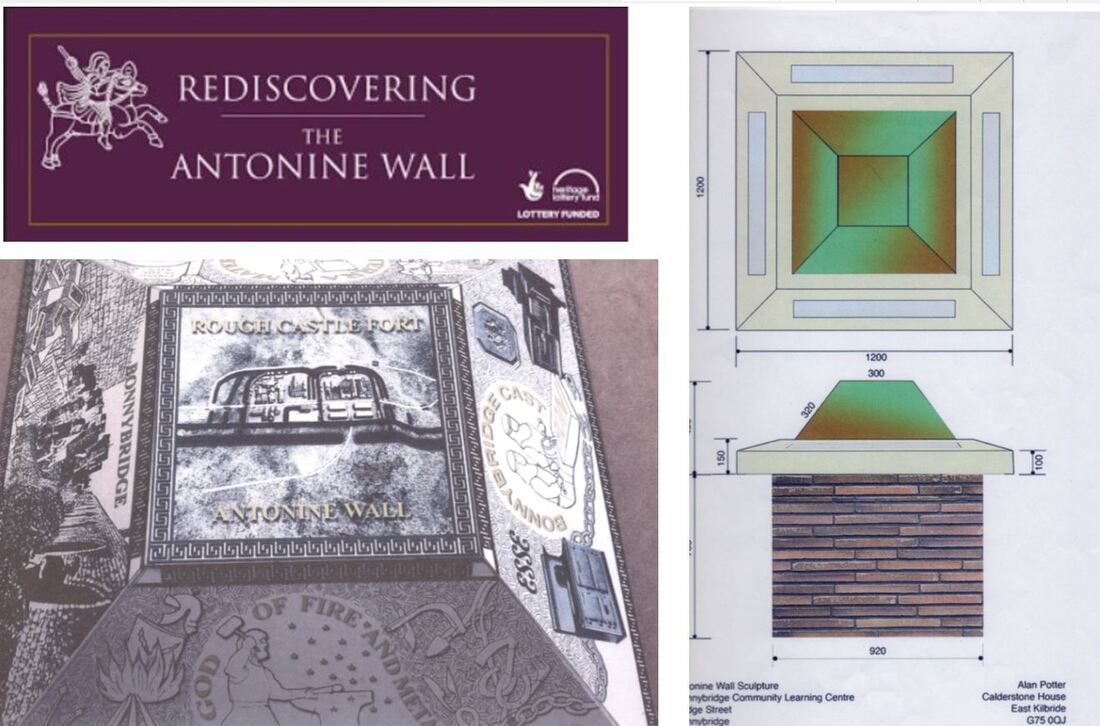 Still in the early stages of development we propose to commission a graffiti artist to fill the gable end of the old co-operative building (overlooking the Scotmid car park) with an appropriate mural. Below is a mock-up of what it might look like using an image from one of Glasgow's famous murals.