the smith and wellstood mural

Return to introduction page
RETURN TO PROJECTS PAGE
(Main photo - corner view of the Smith and Wellstood mural - the two painters are 3-D paintings of S&W's own workforce.)
Smith and Wellstood was the biggest iron foundry company (among many) in Bonnybridge and was world famous for their cast iron products - mainly stoves. To celebrate their 150th anniversary in 1981 they had a huge mural painted on the outside of their foundry by Paul Grime (who got the original commission), James Mooney, David Wilkinson and Kenneth White (see main picture) showing - in the centre - pictures of the original founders in the windows and at the door of the office and on the right a trompe-d'oeil painting showing the interior of the foundry. On the left beside the canal the windows carried paintings of management, administration and finishing staff. All the workers depicted were actual personnel at the time. Sadly the mural was demolished in 1996 after the foundry closed but a 32' x 12' replica, giving some of the history of the foundry, the names of many of the workers, the names of the original artists and details of funding contributors, now adorns the outside wall of Bonnybridge Community Centre.  The  new mural was entirely funded by donations from local businesses and members of the Bonnybridge Community.
A review of the Community involvement in the production of the mural replica is contained within this research document commissioned by the Saltire Society. Click the PDF symbol to download.

Download File
The Smith and Wellstood Mural
Early on a Saturday morning in 1996 the people of Bonnybridge woke up to discover that a familiar sight had been swept away without warning. The Smith and Wellstood Mural, commissioned in 1981 to celebrate the firm’s 125th anniversary, had been demolished and swept away to make place for a new housing development. Recognised as the longest outdoor mural in the UK at the time, and awarded the Saltire Prize for Art in Architecture for its sweeping beauty and detail, the mural was gone after only 15 years of existence. Local residents were furious at the time, particularly as the mural depicted the actual workers of 1981 – many of whom were fondly remembered deceased relatives and others who were, in fact, still living at the time of destruction. By public acclaim a project was set up produce a replica of the mural to be mounted on the Community Centre wall. Very quickly £3,500 was raised from local businesses and public subscription. The original artists – Paul Grime (who got the original commission), James Mooney, David Wilkinson and Kenneth White - were traced and contacted and they were very helpful in producing a photographic facsimile of the mural. Twelve 8' x 4' panels were commissioned (covering 382 square feet), given a protective coating and mounted on the wall by local businesses (for free!) and the finished mural officially 'opened' on 8th May 2016. 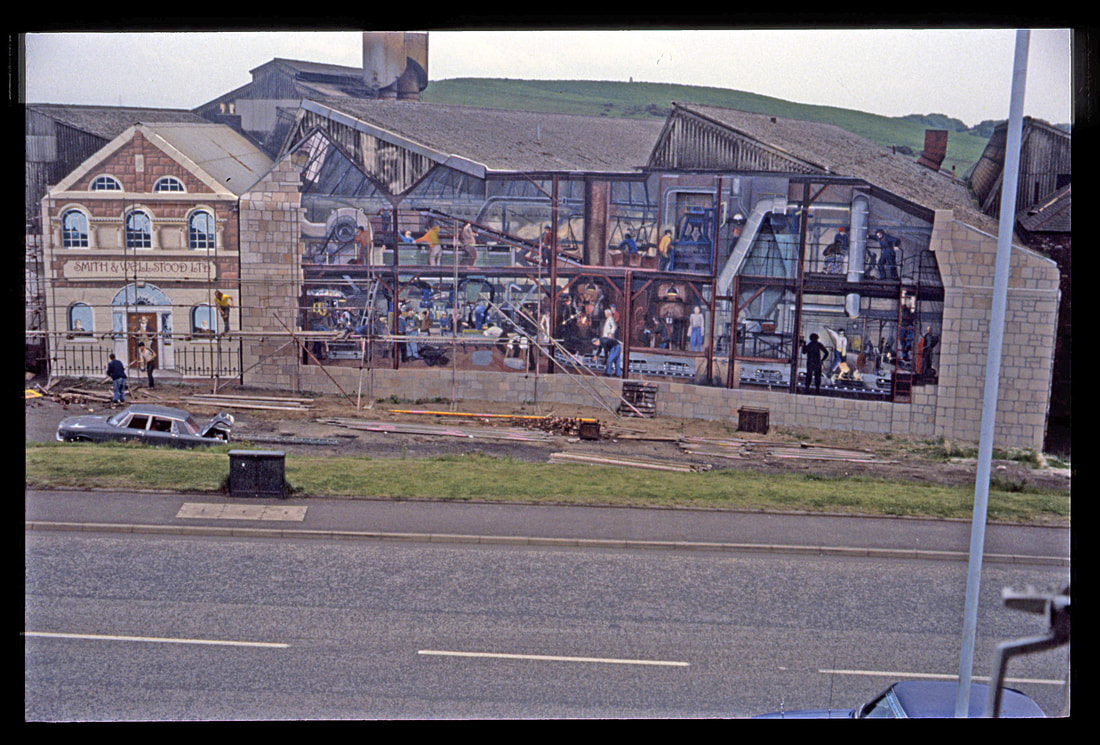 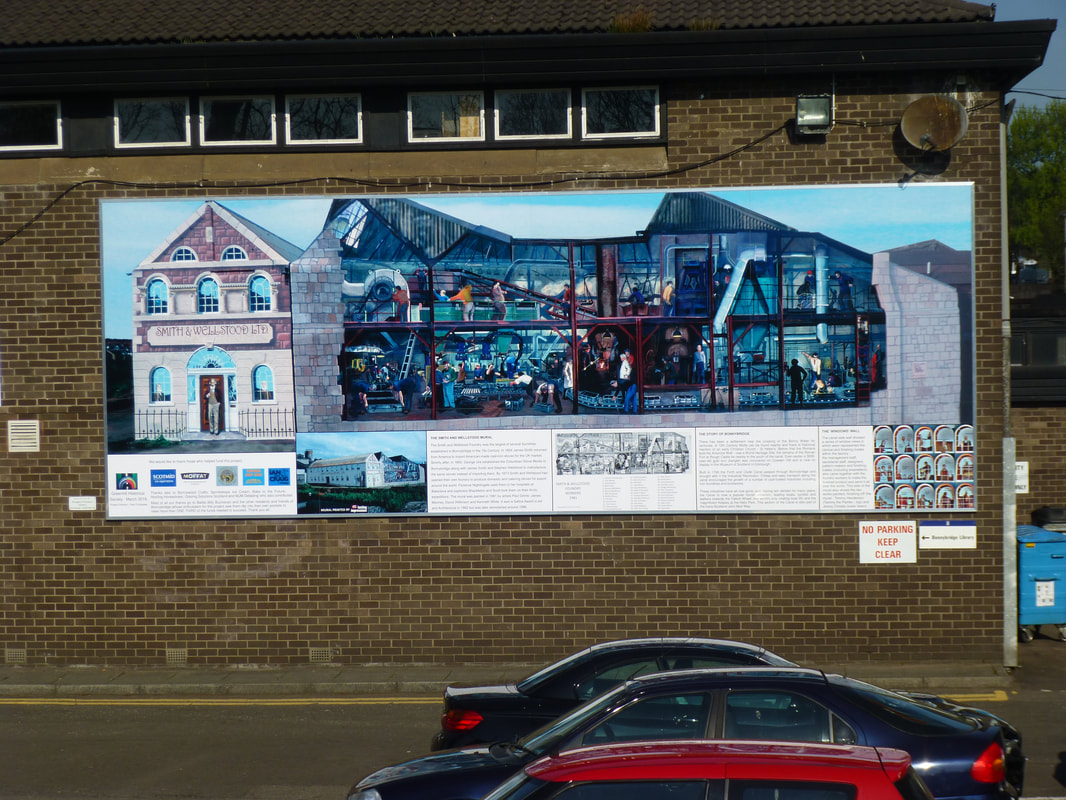 In position on Community Centre wall. 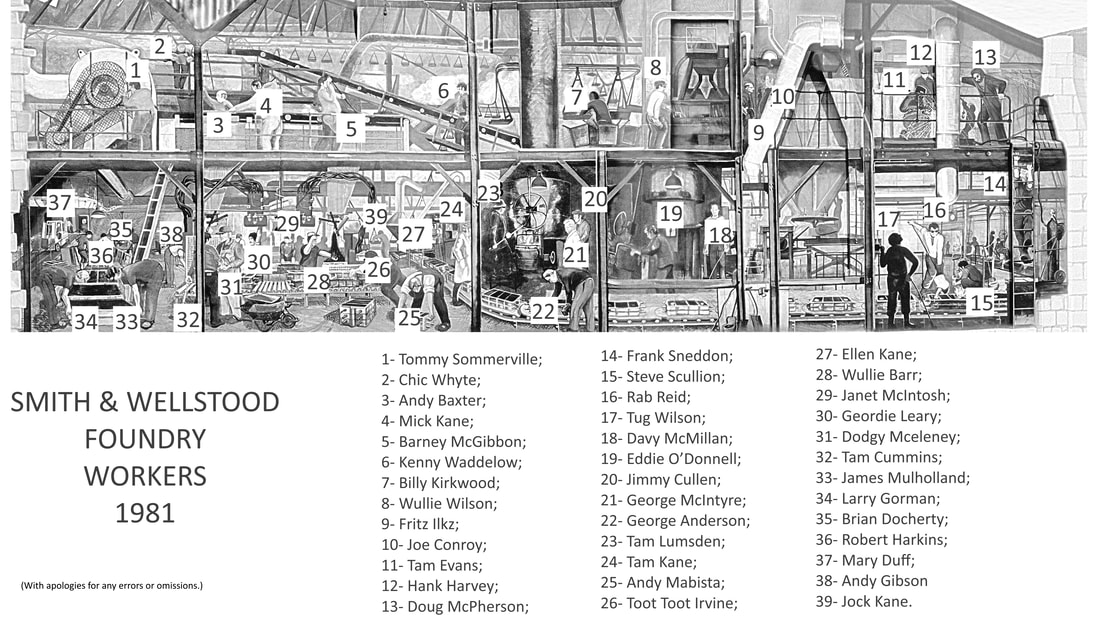 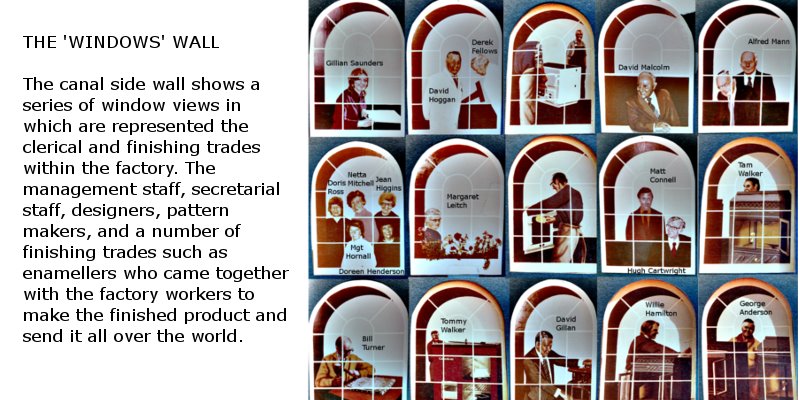 We were very fortunate to receive the original photographic slides taken by the artists before they started on the painting. We keep those in our archives but many are copied in the slideshow below.
Return to menu page